Murray Park: History of Agriculture in SLRD Area B 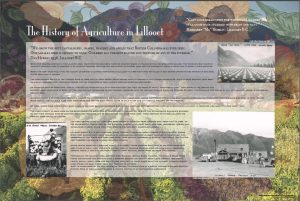 “Cast your bread upon the waters in Lillooet and it’ll come back studded  with fruit and nuts.” – Margaret “Ma” Murray, Lillooet B.C.

When the first road built into the Colony of British Columbia terminated at Lillooet in 1858, many who travelled it saw better opportunities farming & ranching in the area than in mining.  The town became Mile 0 of the Cariboo Road in 1862 and Lillooet grown produce became much in demand in the Cariboo goldfields, providing fodder for the hundreds of pack animals carrying supplies northward as well as to the miners at the end of their trek.

In 1861 the Martley family took over a ranch near Pavilion and named it the Grange.  The Grange shipped large quantities of beef, mutton, poultry and vegetables to the Cariboo. Combined with the historic Carson Ranch on Pavilion Plateau, the Grange is now owned by one of Canada’s largest suppliers of organic beef.
Jonathan Scott, a planter from Kentucky, farmed the upper bench across the Fraser after a nine-mile long flume/irrigation ditch from Fountain Lake was built that same year.  Miners were sorely missing tobacco, and for the next twenty years he sold plugs and cut tobacco straight off his presses.

By 1864, flour from Oregon cost $100 a sack in Lillooet.  Four enterprising investors built a mill and were supplied with grists from ranches surrounding Lillooet, producing high quality flour until 1908.

The first attempt to grow hops on the bench above the north end of town ended in failure but in 2009 two enterprising biologists succeeded and their vertical rows of eighteen foot high trellises can be seen across the river from here. Their ambition is to make Lillooet the organic hops capital of Canada.

The first grapes in the Lillooet area were grown at Fountain from cuttings sent from Italy in 1863. After experimental trials verified the superior terroir of Lillooet soils, our first commercial winery was established in 2009. Since then, Fort Berens has won many awards and medals.

Lillooet boasts B.C.’s best tomatoes. When Japanese Canadians were interned in East Lillooet during WWII, they shipped many train carloads of luscious sun-ripened Lillooet tomatoes to Vancouver. Connoisseurs of fine foods now come here every year and buy hundreds of kilos of tomatoes at the Old Airport Gardens for salsas, sauces and home canning.

Throughout SLRD Area B in the heart of the Fraser Canyon, historic West Pavilion, Bridge River, Yalakom, Fountain & Texas Creek farms and ranches are rising to meet a growing demand for healthy food. Local organic vegetables, fruits, garlic, honey, eggs and poultry are available in local shops or at the Lillooet Farmer’s Market every Friday on Main Street from May through to October.

“We grow the best cantaloupes, grapes, peaches apples that British Columbia has ever seen. Our alfalfa seed is second to none. Our beef has the best flavor and texture of any in the interior.”